31 May Legal and Practical Issues of Medical Marijuana 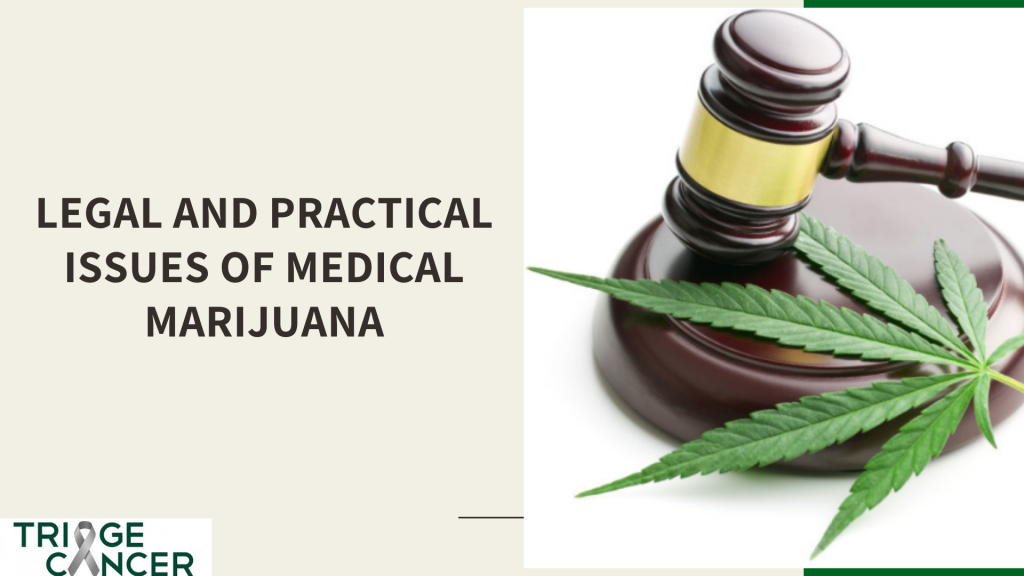 Understanding the legal and practical issues surrounding medical marijuana can be a bit confusing and if you look at the history of marijuana (cannabis) use and regulation in the U.S. it is easy to see why. Cannabis was considered a legal medicine in the U.S. from 1850 to 1942.

Then, in 1937, President Roosevelt enacted the Marijuana Tax Act of 1937, which made the prescription of cannabis illegal. The efforts to pass this law were rooted in immigration and discrimination issues at the time. Fast-forward to 1969, in the case of Leary U.S. Supreme Court, this Act was ruled as unconstitutional, so, in 1970 Congress repealed the Marijuana Tax Act and replaced it with the Comprehensive Drug Abuse Prevention and Control Act.

Title II of this federal law, referred to as the Controlled Substance Act (CSA), classified certain drugs into “schedules.” Marijuana is classified as a Schedule I substance, a substance on par with heroin, LSD, and ecstasy. A Schedule I substance is a drug or other substance with a high potential for abuse and has no currently accepted medical use in treatment in the U.S, and has a lack of accepted safety for use.

Over the last two decades, states have passed legislation to legalize possession and use of marijuana, not only for medical purposes, but also for recreational use.  Colorado, Washington, Oregon, Alaska, and DC have passed laws that allow for the legal use of small amounts of marijuana. In addition to these states, many others have followed a trend legalizing marijuana for medical use.

The first state to allow for medical marijuana use was California in 1996. Although many states have passed this legislation, there are significant differences among those laws. For example, some states require patient registry or ID cards, some allow for dispensaries or retail sales, and some states only allow use for specific medical conditions, such as epilepsy. Some states do not actually legalize medical marijuana, but allow it to be used as legal defense to criminal possession.

Is marijuana legal or illegal?

Possessing or using marijuana is still illegal under federal law, even though some states have legalized it.  Now if you are thinking, how does that work? You are not alone.

This conflict between laws has certainly led to some confusion and challenges in the legal arena. In 2005, the U.S. Supreme Court ruled that the federal government has the right to regulate and criminalize cannabis in states, under the commerce clause. However, by 2009, the U.S. Attorney General announced that it was no longer a “priority to use federal resources to prosecute patients with serious illness or their caregivers” regarding medical marijuana.

Similarly, in 2013, the Department of Justice announced that it would continue to enforce CSA with regard to 8 priorities, including: preventing distribution to minors and preventing revenue from being directed into illegal enterprises or using marijuana as a cover for other illegal drug activity. Then, in 2014, Congress passed a law prohibiting the federal government from using its resources to impede state medical marijuana laws.

How does this affect you? What issues may arise?

The use of medical marijuana may also affect your ability to remain employed or gain employment. Employers have a right to have a drug-free workplace policy and enforce it. This means that an employee can still be fired if they test positive on a drug test, despite having a prescription or physician recommendation for the use of medical marijuana. Earlier this year in New Mexico, a federal court dismissed a case brought against a company by a newly hired employee who was fired for failing a drug test for marijuana. This case and several others have set precedent in some states that a reasonable accommodation to allow use of medical marijuana, is not required.

Whether you are a patient or healthcare professional, navigating the legal and practical issues surrounding medical marijuana can prove to be an overwhelming task. Visit our website for updated State Laws and other resources that can help answer your questions or lead you in the right direction.