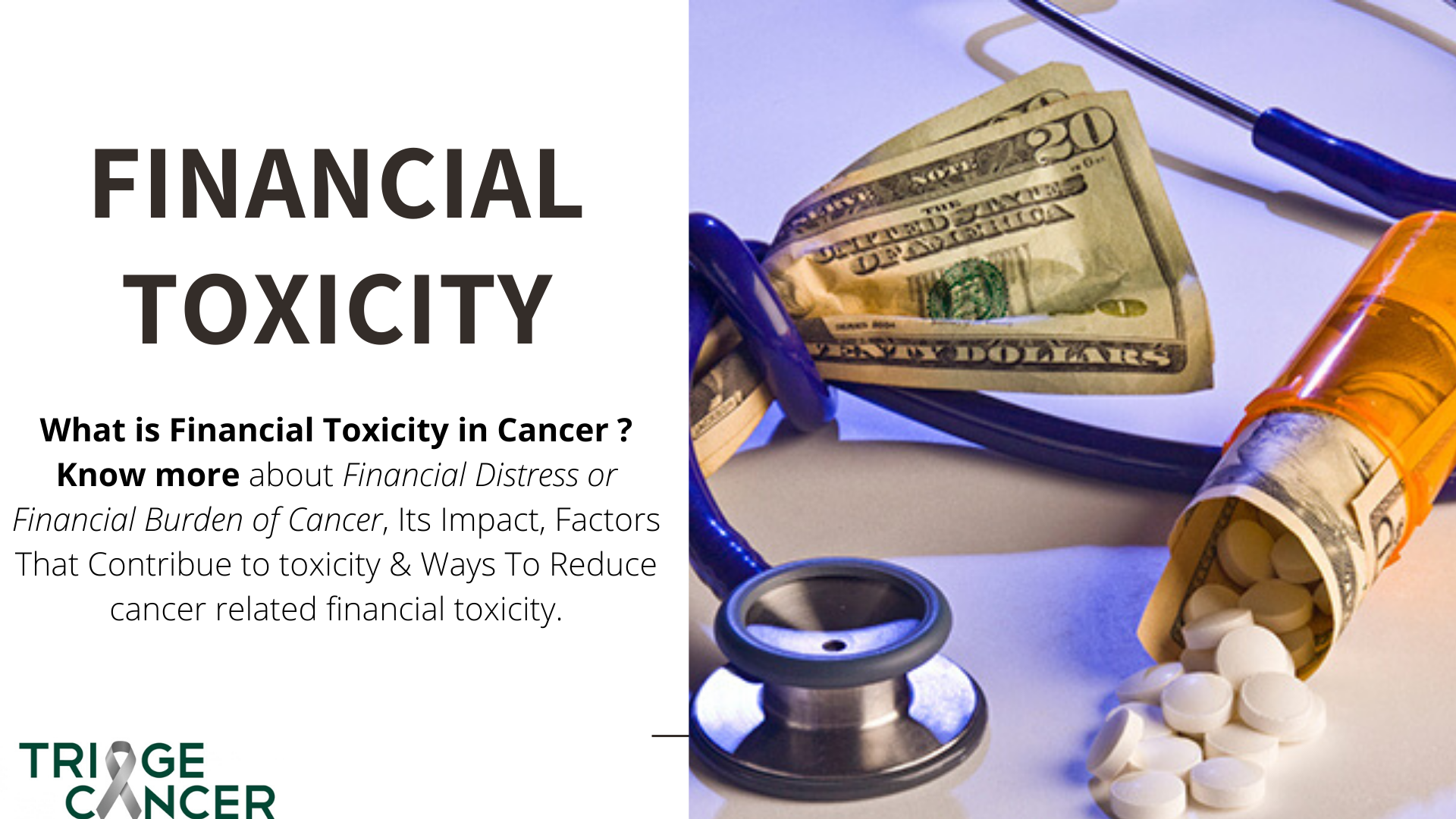 Posted at 13:38h in Finances, Practical Tips by sahil aggarwal 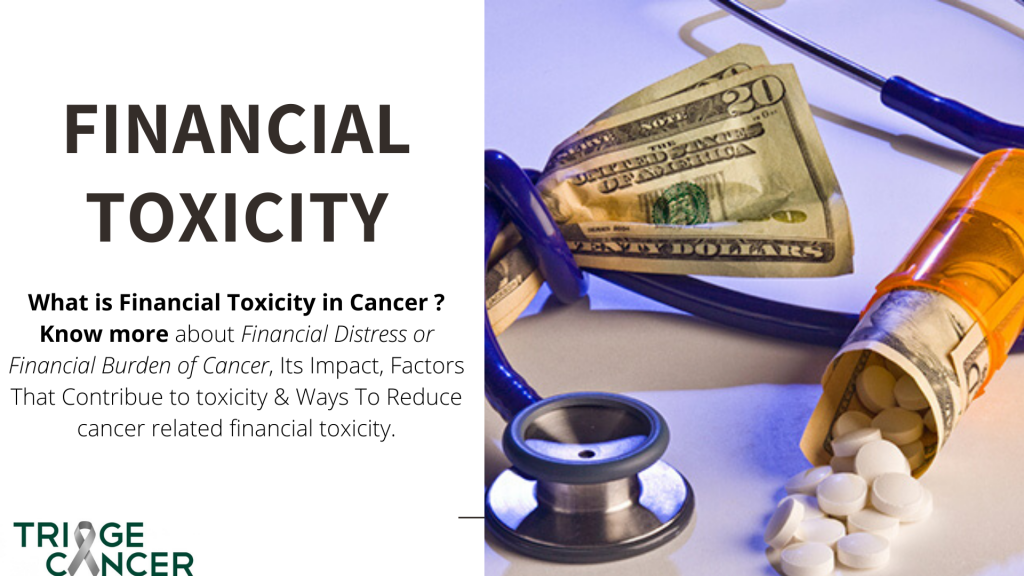 Cancer care is one of the costliest healthcare specialties in the United States (National Cancer Institute, 2017). Cancer treatments are expensive; insurance coverage is often inadequate; and compared to individuals without a cancer history, cancer survivors have higher out-of-pocket healthcare costs, even years after initial diagnosis (National Cancer Institute, 2017). Collectively, these burdens are often referred to as financial toxicity. 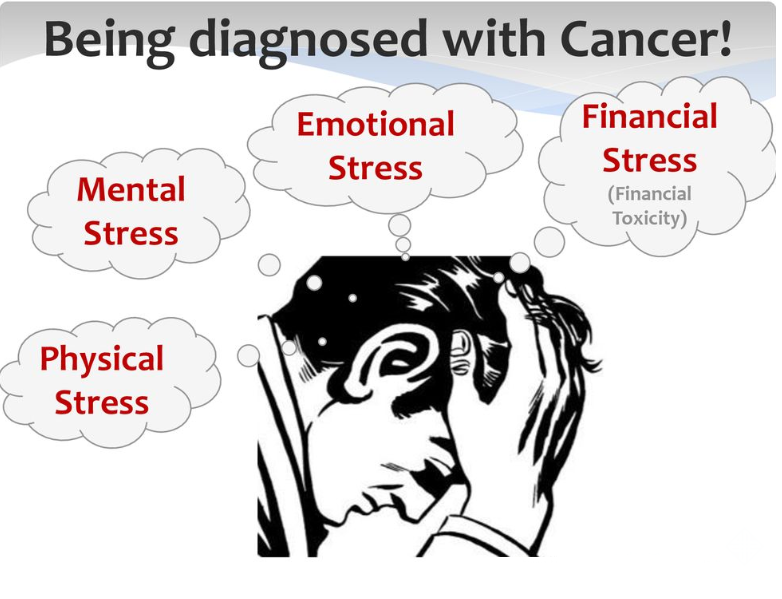 What is financial toxicity?

Financial toxicity is a term used to describe the financial side effects induced by cancer treatment. This term was coined in 2013, by researchers at Duke University (Zafar & Abernathy, 2013).

According to an Institute of Medicine report, “the costs of cancer treatments are escalating unsustainably, making cancer care less affordable for patients and their families and creating disparities in patients’ access to high-quality cancer care” (Levit et al., 2013, p. 2). 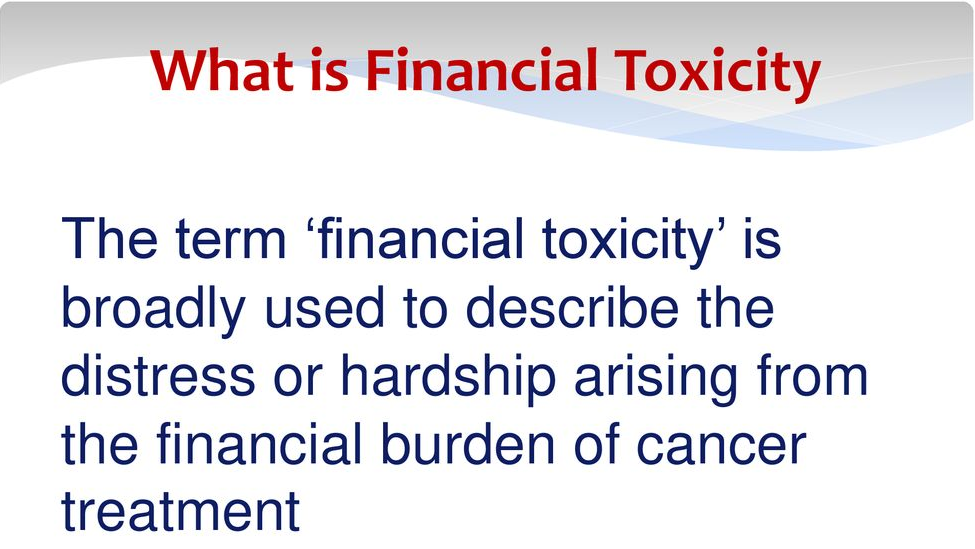 Although financial toxicity is a relatively new term, the problem itself is not new.

A number of terms have been used to describe the financial impact of cancer on families, its treatment, and the late- and long-term side effects, including:

However, financial toxicity has emerged as the umbrella term used most typically used by oncology health care professionals and the cancer community.

Individuals diagnosed with cancer have to deal with:

Mental health refers to your ability to process information.

Emotional health, on the other hand, refers to your ability to express feelings which are based upon the information you have processed.

While being diagnosed with cancer alone can put a person under tremendous amounts of mental & emotional stress, the additional burden of the outrageously expensive medical care only adds to the strain.

The dramatic rise in the cost of cancer treatments has now given rise to what is being called financial toxicity in cancer patients.

Based on data from 2007, 62% of all bankruptcies in the United States resulted from medical debt, and 78% of those filing for bankruptcy because of medical debt had health insurance coverage (Himmelstein, Thorne, Warren, & Woolhandler, 2009).

Shankaran, Jolly, Blough, and Ramsey (2012) found that 25% of colorectal cancer patients were in debt because of treatment, and the average debt was $26,860.

A more recent study found that cancer patients are more than twice as likely to declare bankruptcy as those without a cancer diagnosis (Ramsey et al., 2013). 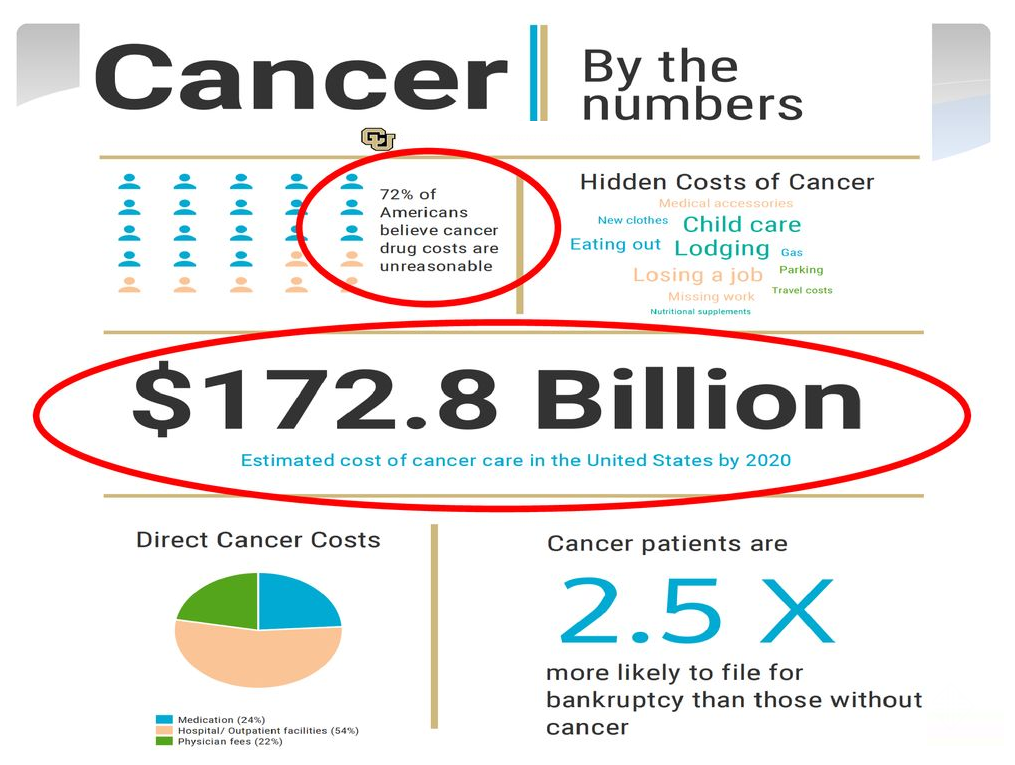 Who is impacted by financial toxicity?

The number of cancer survivors is projected to increase by 31% to 20.3 million by 2026 (Bluethmann, Mariotto, & Rowland, 2016). As cancer treatments improve, more people survive longer after a cancer diagnosis.

Many live with cancer as a chronic condition that requires constant or intermittent therapy over months or years, thereby increasing the long-term negative financial impact.

In addition, long term cancer survivors face ongoing healthcare costs for follow-up care, such as for late and long-term effects of cancer and treatment.

A 2016 LIVESTRONG survey found that of cancer survivors surveyed:

Another study found that patients were more likely to file for bankruptcy two or more years after their cancer diagnosis.

As of 2015, 43 million Americans had medical debt in collections that had negatively impacted their credit.

For 15 million of those individuals, the medical debt was the only negative item on their credit report, demonstrating that the financial impact of a serious medical condition can be devastating to even the most financially responsible individuals.

The impact of financial toxicity on young adults is even more pronounced. There are multiple factors that contribute to the increased financial burden of cancer on young adults. For instance, young adults between the ages of 18-34 are more likely to be unemployed than those over the age of 34.

Furthermore, half of the full-time students and workers report difficulty continuing with school or work after a cancer diagnosis.  Which may contribute to difficulties obtaining health insurance in the future, due to the fact that many young adults rely on an employer or school-sponsored health insurance coverage.

Young adults are more likely to be uninsured, which decreases access to quality health care and increases the potential for financial devastation after a cancer diagnosis. Childhood cancer survivors may face higher out-of-pocket medical expenses well into adulthood.

What Factors Contribute to Financial Toxicity in cancer patients?

When facing a cancer diagnosis, a number of factors contribute to a challenging financial situation. The person with cancer or caregiver may be unable to work for a period of time because of treatment challenges and recovery.

Inadequate or lack of health insurance can result in an inability to pay higher out-of-pocket costs or other household expenses causing damaged credit scores.

Although some people with cancer may be able to use savings to cover expenses, studies show that 31% of consumers have no non-retirement savings (Harris Poll, 2016).

Cancer treatments are expensive, insurance coverage is often inadequate, and compared to individuals without a cancer history, cancer survivors have higher out-of-pocket health care costs, even years after initial diagnosis.[1]

According to the Institute of Medicine,

“rising costs are making cancer care less affordable for patients and their families and are creating disparities in patients’ access to high-quality cancer care.”[2]

The direct costs of cancer health care are not the only factor of financial toxicity for cancer patients. These patients also experience a loss of productivity at work, which can include fewer hours of work, days off work or even job loss due to poor health.

A study using the results of 89,520 patients who participated in the medical expenditure panel survey found that patients undergoing cancer treatment missed 22.3 more days of work per year than people without cancer treatment [9].

At the time of diagnosis, 81% had retained their job four months after the end of treatment. However, low-income women were disproportionately affected, with only 57% remaining in employment, compared with 95% of high-income women.

Health care costs related to cancer can also lead to asset depletion. Between 33% and 80% of cancer survivors have used their savings to pay for medical expenses, which for many entails considerable medical debt. [12]

These expenses can have additional lasting effects on personal credit and retirement savings.

Finally, cancer related financial toxicity describes not only the measurable financial impact in dollars but also the personal stress and financial concerns of cancer patients and their families.

Between 22% and 64% of cancer patients report being stressed or concerned about paying for their medical expenses [13].

This increase can lead to psychological distress, particularly in cancer patients already at high risk of emotional distress, anxiety, and depression. [14]

Compared to 10 years ago, patients receive chemotherapy, immunotherapy and other types of new therapies that are expensive.

Co-pays for prescription drugs covered by health insurance are likely to be higher for brand-name and specialty drugs (compared to generic ones) and may increase over time.

The increased cost of drugs can lead to financial toxicity even for individuals who have health insurance.

What is the Impact of Financial Toxicity?

Cancer expenses can be catastrophic to patients, both with regard to their outcomes as well as their financial situations.

Even if an individual is able to access quality cancer care, the cancer related financial burden can negatively affect their quality of life. Numerous studies have been conducted that show a direct coloration between financial stress and a cancer diagnosis.

In a study, of patients participating in phase 1 clinical trial and their spousal caregivers, 82% of patients reported medical cost concerns and 79% reported financial stress.

In the same study, 83% of employed spousal caregivers reported wage concerns. These financial concerns significantly contributed to a decrease in the quality of life among cancer patients and their caregivers. [Hlubocky]

Furthermore, the physical, psychological, and financial impact of cancer does not necessarily end when active treatment does.

Another study concluded that the “increased financial burden as a result of cancer care costs (cancer treatment toxicity) is the strongest independent predictor of poor quality of life among cancer survivors.”[Fenn]

Research has shown that individuals saddled with high out- of- pocket costs related to their cancer treatments “reduce their spending on food and clothing to make ends meet or reduce the frequency in which they take prescribed medications.”

Unfortunately, health care providers rarely have meaningful conversations with their patients about the costs prior to starting treatment.

One survey found that only 25% of patients said they had a full understanding of the out of pocket costs they would incur. Additionally, 66% of respondents said they did not remember having the costs explain to them either before or during treatment.

Fifty percent of patients interested in talking about the cost of care (financial toxicity in cancer care) but only 19% have had that cost discussion.

When financial issues were discussed, it was the patient who initiated the conversation 70% of the time. Sometimes, this lack of communication between patients and health care providers leads to results in overlooking viable, less-expensive, yet equally effective treatments. The end result is that patients experience unnecessary financial distress.

According to a survey done by the Association of Oncology Social Workers, 66% of cancer patients with major financial challenges suffer from depression or anxiety.

Sixty-three percent of oncology social workers surveyed in that same study reported that financial issues reduce patients’ compliance with their cancer treatment even though that treatment is key to their recovery.

Additionally, 40% of patients reported depleting their savings, almost 30% reported dealing with bill collectors, and 54% of those handling a major financial burden said it had become more difficult in the past year to afford treatment. Perhaps most alarmingly, bankruptcy after a cancer diagnosis appears to be a risk factor for early mortality.

A 2016 study, found that individuals who declared bankruptcy after a cancer diagnosis were 80% more likely to die than those who did not.

A study released in 2013, found that cancer patients are more than twice as likely to declare bankruptcy as those without a cancer diagnosis.

Furthermore, the longer someone survives after a diagnosis, the higher the chance of bankruptcy. Therefore, it is imperative that finances are part of the discussion around navigating cancer survivorship. 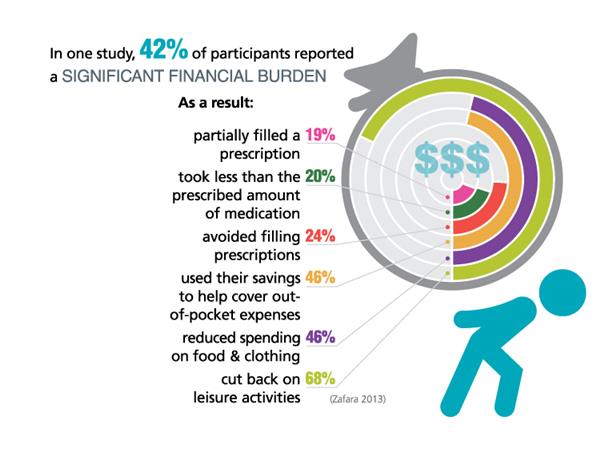 The research and conversations on the financial toxicity of cancer care have primarily focused on high out- of- pocket costs (OOP). OOPs can be catastrophic to patients, both with regard to their outcomes as well as their financial situations. Overwhelmed by cancer treatment costs, patients resort to many strategies that have a negative impact on their well being.

One study found that “policies and practices that minimize cancer patient’s out- of -pocket costs can improve survivors’ health-related quality of life and psychological health.”

The most effective way to reduce individuals’ out- of -pocket costs is to ensure they have adequate health insurance.

Additionally, individuals coping with a cancer diagnosis should make certain their income isn’t negatively impacted because they are forced to stop working.

For individuals who need to take time off work, either for themselves or as a caregiver, maximizing disability insurance and paid family leave benefits can help to minimize the negative financial impact.

For more information on picking a health insurance plan. Additionally, individuals coping with a cancer diagnosis should make certain their income isn’t negatively impacted because they are forced out of work.

For More Information About: